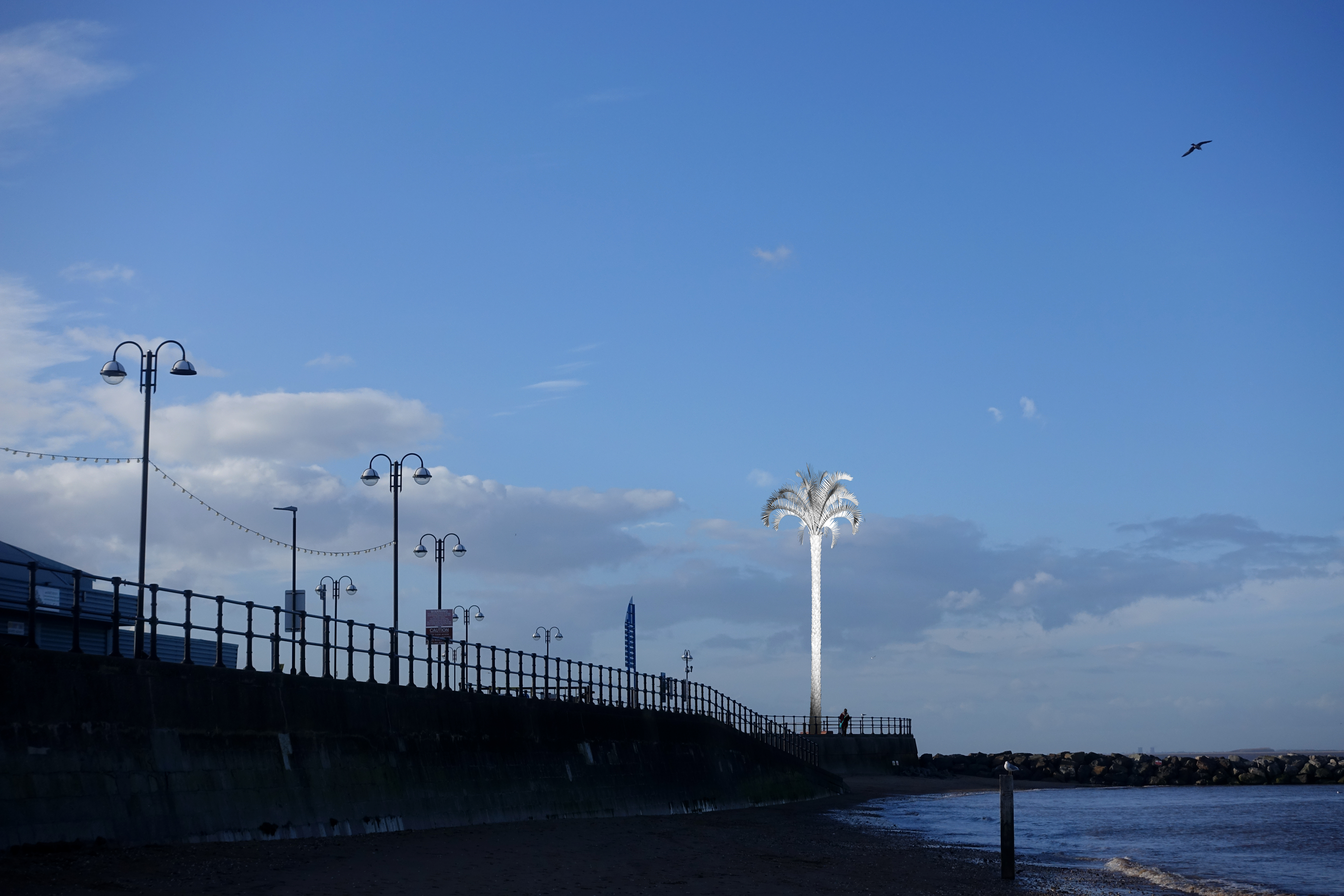 The North Prom is a significant and popular destination with a distinct history and culture of leisure and recreation. It defines an edge, between the Humber Estuary shaped by the forces of nature, and the urban environment of Cleethorpes, created through human activity over hundreds of years.

As well as being an important location for traditional seaside enterprises such as amusement arcades, cafes and takeaways, the North Prom is also now home to a number of new and enterprising ventures in tune with contemporary culture, and a popular venue for sports and fitness activities.

Earlier this year, some specialist public art consultants were employed, Andrew Knight and Hazel Colquhoun, to work with Hodson Architects to carry out research with businesses and local people. People were really keen to improve the appearance, see more colour, update and refurbish and provide more areas of interest.

The approach taken by the consultant was to consider the North Prom in its entirety, celebrating it as a public place – a stage and linear viewing platform from which to enjoy the grand panorama of sea and sky. It recognised the promenade as a distinct and special place dedicated to leisure, walking, and procession for the good of mind and body, not forgetting the entertainment and attention of others.

The next phase is detailed design work for each of the elements, and in the case of the White Palm, application for planning permission which will go through the normal planning process.

In conjunction with wider works in the resort, the area has been awarded a grant from the Coastal Communities Fund specifically to improve the arts and culture offer, with a twist. It will deliver a sculpture larger in height than the Angel of the North, dynamic swirling illuminations, fitness street furniture, and the longest outdoor contemporary visual gallery in the UK.

Cllr John Fenty from North East Lincolnshire Council said: “Art can be controversial. Did you know that the Angel of the North was strongly opposed, but now is a much loved landmark? The objective of the overall project is to drive footfall along the North Prom which will have a positive impact on businesses and health and wellbeing.

“I would like to thank CoastNEL and their North Prom group for the major contribution to this project. The four new public art projects will be centred around Cleethorpes’ stunning seascape and miles of golden sands, encouraging activity and events, relaxation and contemplation, all in equal measure. Public art can be marmite – love it or hate it, it’s a talking point. If The White Palm lures you down the North Prom don’t forget to buy a stick of rock, or an ice cream, then it’s job done!”

“The different elements will not just be something we see in passing, they will engage our thoughts, and our emotions, so that a healthy walk along the Prom becomes an experience.”

Julia Thompson, Chair of CoastNEL, the group that secured the funding: “This piece of work gives a boost to the arts and culture sector, who have worked with local businesses from the North Prom, the wider resort, the local authority and CoastNEL to bring something different.  Creating a place for both residents and visitors, to explore and enjoy.”

Keely Sheeran, business owner on North Prom: “We are very happy to hear that we could be getting such a great attraction along the North Promenade. We feel that this is exactly what we need along here. We’re sure that it will bring many holiday makers and day trippers to Cleethorpes and the businesses along the prom will benefit from it.”

The White Palm is a proposal by Wolfgang Weileder for a new large-scale public sculpture for the North Promenade in Cleethorpes.  The artwork consists of an 22m tall white artificial palm tree and black paving that references its shadow at noon.  The shadow paving underneath The White Palm will be partly made from recycled non-organic material collected from Cleethorpes’ beaches. At night The White Palm will be illuminated by spotlights.

The White Palm is a visual image that is easily identifiable and accessible to a wide audience.  Referencing the classic Mediterranean beach promenade, it plays with the local fun seaside experience. The White Palm will stand out as a beacon to be seen from the land and the water and has the potential to be a major landmark for the whole area.

Situated on the far end of the North Promenade, the sculpture will be positioned next to the Humber that covers a petrified forest. The remains of three stumps are sometimes visible at low tide. As the only other trees in the area, they are marks of what was once a very different landscape.

Echoing the remains of the trees in the water and creating the shadow from the litter on the beaches, The White Palm references the past, but is also a warning for the future.  If we don’t change our behaviours and the climate continues to deteriorate, palm trees might become a common sight on the East Lincolnshire coastline.

Wolfgang Weileder is an artist whose practice is primarily concerned with the examination and critical deconstruction of architecture, public spaces and the interactions we have with the urban environment. His works are investigations into the relationship between time and space, the interface between permanence and transience, and how these can be explored to question our understanding of the landscape, both built and natural.

His work engages with the world through large-scale, permanent and temporary site-specific installation and sculpture; temporal recordings of spaces and environments through photography; film, performance and sound installation.

Wolfgang Weileder is originally from Munich, Germany. He moved to the UK in 2000 and is currently Professor in Contemporary Sculpture at Newcastle University.

The Long Gallery project could create one of the longest contemporary visual art shows in the country. Around 16 artists will be assigned a property to design artwork for as many of the shutters along the prom as possible. There’s around 750m2 of shutters currently in use on the prom. The transformation to colourful, contemporary works of art will complement the illuminations along the North Prom as you are drawn towards the White Palm.

The first shutters to receive the exciting treatment will be those at Brown’s Café.

Owner Charles Crawford said: “We were originally approached by one of the art consultants about this very exciting project for the North Promenade in Cleethorpes. “As part of the shutter art project, various artists are going to work with us to create artworks for our shutters to make them more attractive: the artists effectively using the shutters as their “canvas”.

“Each artwork will be unique but will all form part of a cohesive project that will keep people’s interest as they stroll down the North Promenade. This is an exciting year for the resort with many organisations working together to regenerate areas within the resort.”

Innovative new street furniture, created by award winning design duo Freshwest, will be installed along the North Prom to provide an area for fitness or to just relax on while taking in the stunning views over the Humber.

The funky furniture doubles up as fitness equipment and will stretch 800m (half a mile) along the North Prom with flag markers on the route. Throughout its length, there will be stops for pull ups, sit ups and push ups to help encourage healthy lifestyles, or just for plain relaxation. It’s easy to imagine some competitive endurance events being held along the North Prom at certain times of the year.

Freshwest are an award winning UK design duo, celebrated for their experimental and playful work. Operating from their studio and workshop on the South West Wales coast, Freshwest’s output is an eclectic mix of design for the public realm, furniture and lighting.

Describing their work, Marcus and Simon put it simply, “we aim to make objects of intrigue and fascination, objects to make you stop, smile and consider”.

At the heart of the studio’s practice is a passion for making, experimentation and play.  Freshwest’s work often incorporates functionality with exploration and recreation, transforming everyday objects into sculptural experiences, offering the participants a sense of discovery.

Through the furniture we want to create an environment that will animate the promenade in a new, exciting and unexpected way.

The furniture is designed to encourage exercise, relaxation, contemplation and play. A number of the ‘benches’ have dual function, designed for both seating and exercises. Information plaques will suggest exercise routines for users to follow. Flags are also incorporated to act as distance markers for running.

The aim is to create a resource for local people to enjoy and take ownership of, at the same time providing something intriguing for new visitors to discover and explore.

Paul Walker, director of Walker’s Total Fitness has been working with the art consultants on some of the ideas behind the multi-use street furniture: “The benefits of multi-use street furniture is that it can be enjoyed by people of all ages and fitness abilities to encourage and enable them to get involved in walking, running, exercise and generally enjoying the fresh air and being outdoors.

“The addition of benches on the North Prom will encourage people to go for a stroll and visit this area of Cleethorpes, knowing that they have somewhere they can rest and enjoy the view when they need to.

“For those who are more active and enjoy running and fitness, they can work some of the furniture into their training plans and complete different exercises on the equipment along their usual running or walking route.

“We also find that people always like to pass on their knowledge and show other people what they can do. With the increase in people using social media,  this will add further interest and people will be curious to come and visit the promenade themselves to give it a go on the furniture.”

“Luminations” is an an artwork created in light by artist, Esther Rolinson, which will run along the North Promenade.

It is composed of two dynamic animated lines of festoon lights to be attached to the existing lampposts. The forms of the lines are to run over and around each other. Light movements will chase through them like, “sprites of wind scudding over sand; bursting out in squally crescendos that fade like fireworks drifting to the ground”.

It is envisaged that the curved, oscillating, line of the festoons, rising and falling in three dimensions, will be achieved using two forms of metal framework. The first will be a variable cross-like shape fixed by a collar to the trunk of the lamppost. The length and angle of the arms of the cross could be different on each lamppost to create changes in direction and positioning for the festoon cable. The cross will support lightweight curving metal formers for the festoons to run along.

The proposal refers to the language of seaside festoon lighting and introduces programmed animation into the sequencing and intensity of illumination along the festoon.  It is intended that the overall physical appearance will be elegant and simple, reflecting the traditional eloquence of seaside lighting.

Esther said of the project: ‘Luminations is a very exciting project created especially for Cleethorpes North Promenade. In this artwork I am taking the flowing lines developed in my meditative drawing practice onto a really large scale for the first time. To construct this installation I will use a precise system of curving shapes combined together in many different ways to create a enormous variety of looping forms. It is an artwork that can continue to be extended like a mathematical pattern. When it is all up and running we are going to use topnotch programming to produce dynamic light movements that chase and burst into life along the promenade.’