A COIN pendant, pottery, brick and tiles were amongst the historic finds discovered by archaeologists excavating in trenches alongside the River Freshney. 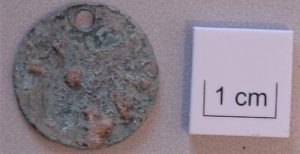 Prior to work starting to transform the Garth Lane area, the town’s real life ‘time team’ was drafted in to search for evidence of a bygone age when this part of central Grimsby was integral to the shipping, fishing and water transport life of the town. The investigations focused on the bank of the medieval West Haven and at the southern end of the west side of the post-medieval Alexandra Dock.

A JCB was used to break the surface of six deep trenches to a level where the experts then took over, digging by hand with an eye for the detail and any important finds. Hundreds of years of reshaping the area did frustrate their efforts to find evidence of the medieval waterfront. In 1986 a waterfront from that era was found close by during excavations at the Riverhead and the historical and archaeological evidence suggests that a wharf did exist here from the medieval period or earlier.

Simon Savage, Field Officer for Lincoln-based PCAS Archaeology explained how, for structural reasons, the dig’s evaluation trenches could only go so deep. The most important historical material therefore would lay even further down, he said.

While not finding any direct historical evidence, the team did expose the outline of a Victorian-era cellar in one trench, an old jetty in another and medieval pottery – although it is believed that was within dumped materials from elsewhere in the town. A single bronze pendant, likely to be a pierced coin from the medieval period and expensive at the time, was also discovered.

“The direct evidence of wharfs was not found. We were however limited as to how much we could excavate, and the likelihood is that this is much deeper,” said Simon, who added how the materials found would be taken away, cleaned, documented and then returned to North East Lincolnshire.

PCAS Archaeology has worked in areas to the west of Garth Lane in the past when it found evidence of timber yards, malt houses and ship repairs with cobbled areas. It also did work on the redeveloped Cartergate site.

As reported, funding from the Humber Local Enterprise Partnership (HLEP) and The Ministry of Housing, Communities and Local Government is being sought to support delivery of the Garth Lane area project.

Subject to confirmed funding, the area is set to be transformed with proposals for new artwork, improved public spaces, new lighting and seating. New tiered landscaping will be created from a new bridge down to the river basin and work to improve the water quality and protect wildlife will be included in the scheme.